We may have temporarily closed our doors, but over the next few weeks we’ll be keeping our creative spirit alive with a number of online activities and competitions. 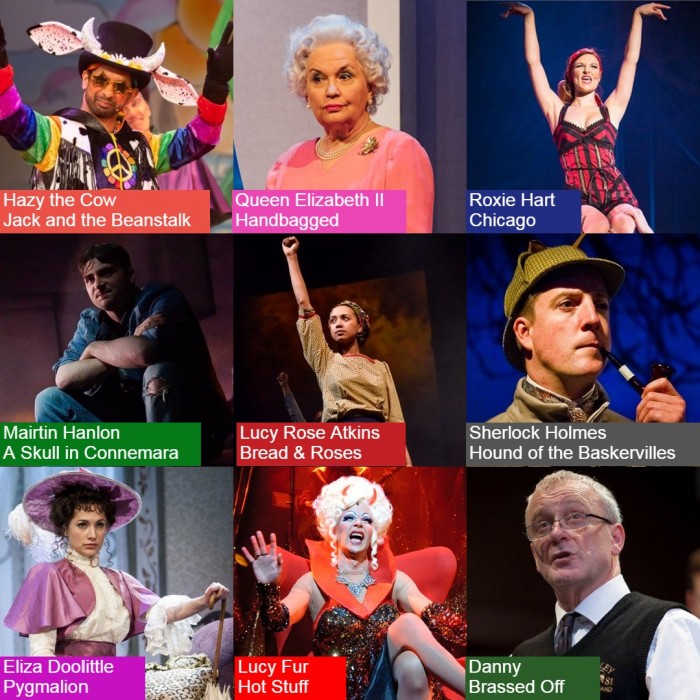 Over the past 135 years we’ve seen some colourful characters light up the Coliseum stage.

Can you write a scene that brings two of the above characters together? Think about the setting in which these two characters may encounter one another.

We’ll share a selection of the entries here on our website and our favourite duologue will win four tickets to see The Jungle Book in 2021. The winner will be announced w/b 18 May.

Have a look at our top tips below…

Hazy the Cow from Jack and the Beanstalk
Hazy is a vegan cow who doesn’t produce milk because it is against his morals. He loves yoga, his best friend Jack and motivational messages – “Give peas a chance!“

Roxie Hart from Chicago
All Roxie cares about is getting into Vaudeville. She is desperate, selfish, sexy and innocent, never thinking about the consequences of her actions. She winds up in prison after shooting a man for ending their affair.

Mairtin Hanlon from A Skull in Connemara
Mairtin is a ne’er-do-well from a rural village in West Ireland. He (mostly) means good but is often misunderstood and judged by past misdemeanours. He forms an unlikely friendship with the local grave digger, who is rumoured to have killed his wife.

Lucy Rose Atkins from Bread & Roses
Lucy Rose Atkins is a single mother who works tirelessly in a local mill. She discovers natural leadership qualities and undertakes a journey from unskilled worker to impassioned leader

Sherlock Holmes from Hound of the Baskervilles
The famous detective Sherlock Holmes is a master of observation and deductive reasoning. He is usually quite reserved but on occasion he can be surprisingly impulsive.

Eliza Doolittle from Pygmalion
Eliza is a fast learner and a very strong character. In the beginning of Pygmalion she is a Cockney flower seller, but with the help of two gentlemen she transforms into a woman as poised and well-spoken as a Duchess.

Lucy Fur from Hot Stuff
The quick-witted, glittered covered temptress Lucy Fur is the devil’s disciple. Through the fabulous art of Drag, Lucy appears as Margaret Thatcher, a Nun and a nurse as well as her demonic self.

Danny from Brassed Off
Danny is the leader of a colliery brass band in Grimley, Yorkshire and it is his lifelong ambition to lead the band to the National Brass Band Competition at the Royal Albert Hall. A miner all his life, he is a proud man who loves music and respects hard work.

Applications closed on Wednesday 15 May