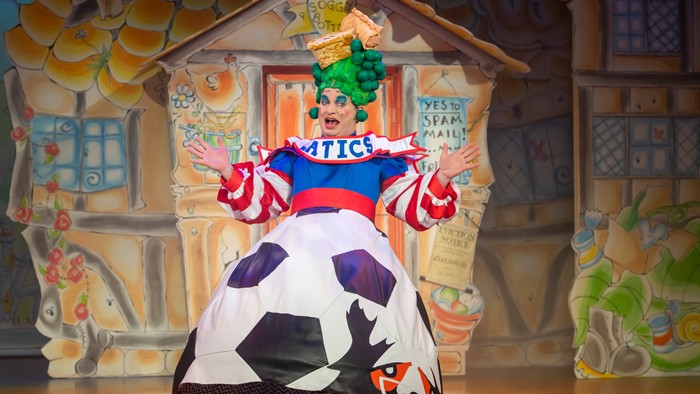 For the past 11 years Richard J Fletcher has delighted audiences of all ages at Christmas as the Coliseum’s high-flying Pantomime Comic. Jack and the Beanstalk sees him step into the extravagant wardrobe of Pantomime Dame for the first time.

We spoke to him about becoming Dame, his history with the Coliseum and his love of  pantomime in Oldham.

How does it feel to play the Dame and were the rehearsals much different as Dame instead of as the Comic?

“It’s not hugely different because it’s still a comic character. I’ve got a bit more scope to do stuff for the older members of the audience this year. The Comic is really mainly for the children, and that’s why I loved doing that character, but I can be a little bit more cheeky playing the Dame. It’s slightly ruder because the Jack character is very naive whereas the Dame character is anything but. It’s just a great laugh.

“It’s quite odd watching Sam [Glen, playing Jack] doing what I’ve been doing for the last decade, but he’s brilliant at it. I think he’s great, he’s got a really good energy.

“What was really funny was that he told me that he’d spent his youth coming to watch me playing that character – which makes me feel really old! But that’s why it’s great being back at the Coliseum, because I used to come here throughout my youth to watch panto. This is where I started watching pantos from the age of probably three or four-years-old – with Kenneth Alan Taylor and Jeffrey Longmore as Dames”.

What can audiences expect from your Dame?

“I’ve spent the last 11 years in a rehearsal room with Fine Time [Fontayne, co-writer and former Coliseum Dame] so I think subconsciously I’d been learning quite a lot over those years from him. Hopefully I’ll be able to bring a little bit of what I’ve learnt from him to the show. My Dame is a bit younger than Fine Time’s and she’s a better dancer! I’m joining in with more of the big dance routines and the design is different – I requested a kitten heel for the opening costume and my makeup is different to his. People will notice a difference. I’ve been practising walking in my heels because it’s not easy dancing in heels as I’m sure ladies will agree! A kitten heel is enough for me!”

Are there any other differences in this year’s show?

The writing of Jack and the Beanstalk is so up to date. Although it’s pantomime and it’s fun and stupid, it has some serious issues behind the writing. We talk about the villains who are really bad for the environment and they litter – those are very important messages to get across to children – what’s good and bad about littering and the effects on the environment. It’s really relevant to today.

Musically, there are songs that have only just come out and some big hits from the year. I didn’t know any of them before we started rehearsals, except for the ones I recognised from my daughter’s bedroom! When you walk into a shop or you put the radio on they’re playing the songs that you’ve been singing twelve times every week, but that just proves that those are the popular songs. Sometimes you find yourself singing along in the middle of Boots…

Do people recognise you in Oldham town centre through the year?

Because the Comic character always has the call and response from the audience, for the past ten years I’ve had those shouted at me in the aisle in Tesco all year round. I wonder whether they will recognise me this year because I’m going to have a lot of makeup on and I’m going to have some fantastic wigs.

What was it that made you want to get involved with pantomime twelve years ago?

I trained in physical theatre at Drama School and one of my favourite genres is Commedia Dell’Arte, which is kind of where pantomime is derived from – Italian Theatre Commedia. You can find a lot of the Commedia characters in each pantomime. I also like musicals and I’m not good enough to be in them so I get the chance to pretend I’m in a musical! Jack and the Beanstalk is like a full on musical, I think we’ve got 15 songs this year.

What is your history with the Coliseum?

“I started coming to see pantomime at the Coliseum when I was very young and then I did youth theatre here throughout my childhood. When I was 15 had a Saturday job here working in the café, which was called The Lion’s Den – I used to make toasties for all of the actors in a little kitchen which is now the offices next to the upstairs bar. I grew up coming to this place all the time. I went to London for twenty years and then, getting the chance to come back and now to be the Dame myself, it feels like a complete cycle”.

Jack and the Beanstalk runs until Saturday 11 January 2020. Click here to learn more and book tickets.