Scribbles is the Coliseum’s script writing group, led by Amie George. This episode is directed by Kash Arshad. The Mini-Podcast Series is edited by Grant Archer.

2. Sheep by Fraser May
Read by
Dermot Daly as Colin
Alyce Liburd as Jill

3. Some White Men Are Scared of the Moon by Nikki Mailer
Read by:
Levi Payne as Man
Alyce Liburd as Woman

5. Over and Out by Dennis Rogerson
Read by:
Bill Blackwood as Blood
Julie Edwards as Jenny
Jennifer Kay as Maud

6. The Good Guys by Fran Kingdon
Read by:
Bill Blackwood as Tel
Levi Payne as Jamie

8. White by Ian Jones
Read by:
Bill Blackwood as Man

From the North, Bill is a proud Yorkshireman who hails from deep in Gods Own Country. He works consistently in Television, Film, Stage and Voice Over.

He is a graduate of BBC Class Act, a member of Profile Performers and a proud Equity member

Dermot has recently been a voice for several Guardian Podcasts.

Radio credits include: The Beatboxer; Stone; Entanglement; Walking on Sunshine; Writing the Century and The Highgate Letters (all BBC Radio 4).  He is also a BBC Norman Beaton Fellowship winner.

Television credits include: Scarborough and Doctors (BBC) and Emmerdale (ITV).

Julie is a Northern actress and is delighted to be part of the Scribbles Episode of the Mini-Podcast Series.

Jennifer Kay is an actor and movement director who works across a wide range of media. She works regularly on audio projects with Fresh Aire Productions and can be heard as many characters in Queens of Dawson’s City on Chapel FM & BCB radio. BCB Radio will soon be airing Torrent, FreshAire’s newest piece with Jennifer in the lead role.<

Alyce has recently been working on some exciting projects including: Three – one of the first socially distant theatre shows with Wrongsemble and Slunglow, Sonder with Riptide Theatre Company and Charlotte Holmes with The Big Tiny Productions.

Levi is based in Doncaster and has worked for theatre companies including: Red Ladder; Freedom Studios; M6 and Hive Theatre Company, and has worked in collaboration with Leeds Playhouse and CAST Doncaster.

Amie has led the Coliseum’s Scribbles writing group since 2018, when she became an Associate Artist at the theatre (2018-19). During this time two of her plays (Selfies Kill More People Than Sharks and Making Love) were performed in the Coliseum Studio, and she hosted a New Writing night for Northern writers — Write Here, Write Now.

Amie trained on the Royal Court writers programme in 2016. In 2017 she won Oldham Coliseum Theatre’s First Break new writing completion with her short play Waiting. She has also seen her work performed at The Lowry, Paines Plough’s Roundabout and HOME, Manchester. 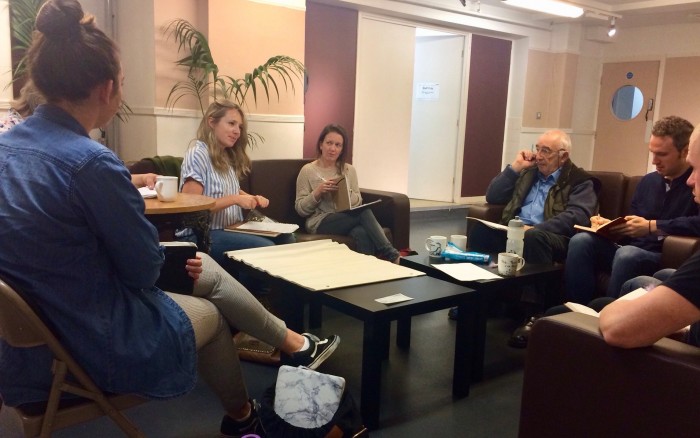 Grant is the Coliseum’s Digital Associate Artist. He initially studied Fine Art Photography in Manchester and London, working on projects with The Theatres Trust and National Piers Society. Recent projects include books on Iceland and Gibraltar, published by Out Of Place Books.

In 2015 Grant co-founded Take Back Theatre with actor Julie Hesmondhalgh and writer Rebekah Harrison, responding to social and political issues. Starting with script in hand rapid response theatre Take Back has expanded into immersive and full length pieces as well as audio recordings and most recently a series of short films.

Awarded a Developing Your Creative Practice fund from the Arts Council in 2019 Grant has been creating theatrical installation work that explores the relationship between live and recorded media and storytelling. Recent works have included Connect – a series of phone conversations at HOME, Patient – and audio/visual installation at Oldham Coliseum and Virtual Reality films at The Lowry, the Coliseum and various site specific locations.