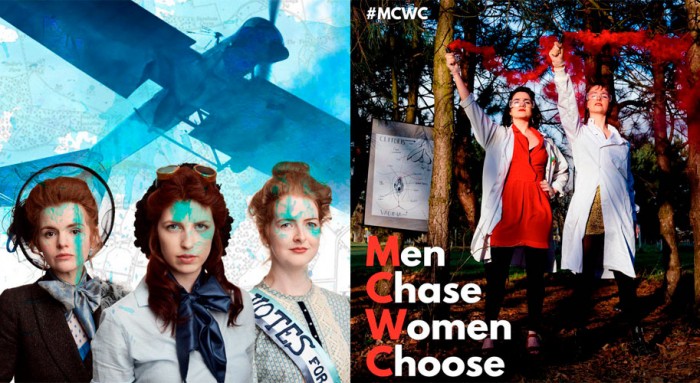 Men Chase Women Choose by People Zoo Productions, one of the Coliseum’s supported shows at this year’s Edinburgh Fringe Festival, will be joined by the theatre’s Pick of the GM Fringe Award winner, Clouds by Time & Again Theatre Company on Friday 27 September.

Chris Lawson, Acting Artistic Director of the Coliseum, commented: “The Coliseum is dedicated to supporting theatre makers creating fresh and interesting new work in our region. This year our Picks of the Fringe share messages of feminism – past, present and future – and science and education. The double bill is a brilliant opportunity for these companies and their shows to gain a bigger platform and a wider reach.”

Amidst the flock of pioneers fighting to rule the skies, Winifred Baxter is determined to become the first Englishwoman to enter an air race and fly right around the country!

In the open fields of Moorhanger Grange, Freddie learns to take to the skies during Britain’s last glorious summer, weathering the chaos of friends and family, the suffragette movement, a glorious garden party and far too much nephology – the study of clouds.

The second play by new young writer Laura Crow, Clouds combines the suffocating society of pre-war Britain with a touch of comedy, early feminism, and pure vintage flair. It shows the characters of 1913 navigating many of the problems still experienced by women today, albeit to a more extreme level, and asks why there is still such a low proportion of women in science and aviation, and how can we change this?

Clouds by Time & Again Theatre Company ran at the Greater Manchester Fringe Festival on 25 July at The Pankhurst Centre.

People Zoo’s feminist science sketch Men Chase Women Choose takes its title from one of many gender myths that pervade our society. This show is intent on skewering some widely held beliefs and unearthing the bad science behind them.

Men: Are you tired of chasing women down the street? Women: Are you deafened by the hoarse mating cries of your prospective suitors? Darwin says it’s our biology. But is it?

Taking the form of a sketch show, with co-creators Sophie Giddens and Eve Shotton at the helm, Men Chase Women Choose is an informative and uproarious feminist romp that features fruit flies, film, physical theatre and a flute solo, putting women, sex and science under the microscope.

Men Chase Women Choose ran at the Greater Manchester Fringe Festival on 6 and 7 July at Hope Mill Theatre. It heads to the Edinburgh Fringe Festival supported by the Coliseum as part of Venues North alongside Best Girl by Best Girl Productions.