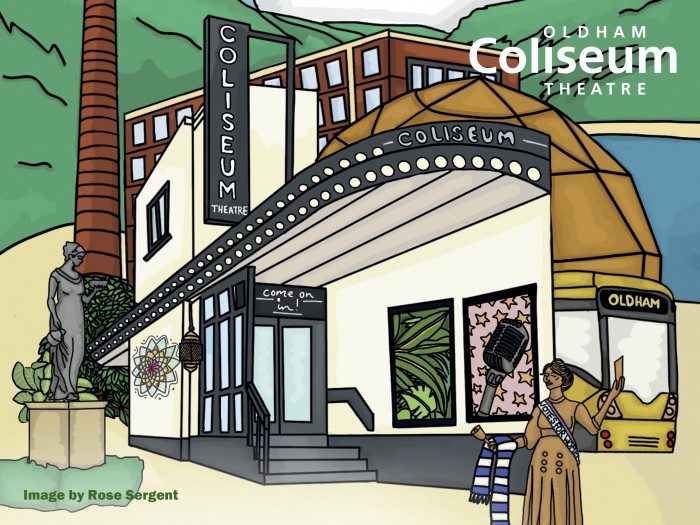 Chris Lawson comments: “Our Spring-Summer programme signifies the future direction of the Coliseum and reflects a contemporary Oldham. I believe there’s something here for everyone and I’m overjoyed by the positive response from our audiences, who are keen to come with us on this next chapter in the Coliseum’s journey. We’re delighted to be working with a whole host of partners – new and old – to bring the best work to Oldham.”

The season opens with a modern musical reworking of Rudyard Kipling’s The Jungle Book by Olivier Award winning writer Jessica Swale, which will be directed by Sarah Punshon.

The first Coliseum-produced family show outside of the festive season in almost 20 years, The Jungle Book is packed with memorable characters, original songs and brilliant storytelling. With a little help from his animal friends Mowgli the man-cub faces Shere Khan the tiger and learns the law of the Jungle.

From Tuesday 9 – Saturday 20 June the Coliseum teams up with Northern Stage, Liverpool Everyman & Playhouse, York Theatre Royal and Greyscale to present Gareth Farr’s Shandyland. On average 27 pubs close each week in the UK, predominantly in working class towns and cities. Shandyland is a story of life, love, death and drink at the heart of a small, northern family run pub, and a shout of frustration from an abandoned working class community. Gareth Farr’s third full length play, it was written as part of the prestigious Old Vic12 scheme.

Speaking with The Old Vic, Farr commented: “I come from a small, working class mining town in Lancashire where pubs are social spaces, they are community venues, they are places of comfort and exceptional conversation… The fact that so many are closing and at such a fast rate means that local working-class pubs could disappear completely from the cultural landscape of Britain and if that happens then what would happen to that environment?”

Additional activity around the production of Shandyland includes a panel discussion exploring the social and economic challenges surrounding local pubs and their communities and a short reading at Oldham’s White Hart Inn followed by the pub quiz.

From the writer of Billy Elliot, The Pitmen Painters and the 2019 hit film Rocketman, Cooking with Elvis is both provocative and hilarious.

The Coliseum welcomes a touring production of Richard Cameron’s The Glee Club presented by Out of Joint, Cast and Kiln Theatre from Tuesday 12 – Saturday 16 May. Described as Brassed Off meets The Full Monty, Cameron’s celebrated play about miners preparing for the local gala is a raucous comedy featuring live music.

The Glee Club – a group of five hard-working, hard drinking miners and a church organist ­– are well established in the working men’s clubs, but they’re not exactly at the vanguard of a musical revolution. It’s the summer of ’62 and Britain and music are about to change, so too are the lives of these six men…

Elsewhere in the season the theatre welcomes Friendsical, a musical parody inspired by the hit TV show (Monday 18 – Wednesday 20 May), and Olivier Award winning comedy Jeeves and Wooster in Perfect Nonsense (Tuesday 26 & Wednesday 27 May).

Friendsical features original new songs including (He’s Her) Lobster!, Richard’s Moustache and You’re Over Me, When Were You Under Me? The gang take on Naked Thursdays, a power cut and a dinosaur convention. What could possibly go wrong?

Jeeves and Wooster in Perfect Nonsense is a new play adapted from the works of PG Wodehouse, written by the Goodale Brothers. Aristocratic buffoon Bertie Wooster has hires the theatre for the night to present his one man show detailing a recent and rather spectacular series of misadventures. In a joyous reimagining of the classic PG Wodehouse characters, three actors hurl themselves from role to role as they race to tell the story.

Chris Lawson comments: “We are delighted to be co-producing Roundabout 2020 season with Paines Plough, and elevating our long-standing commitment to new writing in such an exciting way. We can’t wait for the Roundabout to take centre stage in Oldham town centre and would like to thank our colleagues at Oldham Council for their support of this programme.”

Hungry by Chris Bush is a new play about food, class and grief in a world where there is little left to savour.

Black Love by Chinonyerem Odimba is brand new musical about love. Chinonyerem’s latest work explores romantic relationships between black people, and in particular how this is portrayed, or more often than not, isn’t portrayed on stage.

Really Big and Really Loud by Phoebe Éclair-Powell is a new play for families about living loudly.

The Inconvenience Store by Charlotte Keatley is a new 30 minute short play about a shop that allows people the change themselves, not just their clothes.

2020 is Roundabout’s seventh consecutive year; the season will be co-produced by Paines Plough and Oldham Coliseum Theatre in association with York Theatre Royal. It will open in Oldham town centre in June and continue onto Summerhall, Edinburgh before transferring to York Theatre Royal in September. They will then tour to Salford, Ramsgate, Doncaster, Bournemouth and Lincoln.

From Monday 1 – Friday 5 June Oldham Coliseum Theatre presents its third annual Cultivate Festival focussed on theatre upskilling. An unmissable opportunity for anyone looking to get into any of the many areas of theatre, previous Cultivate festivals have included workshops from Frantic Assembly, Equity Fight Director Kaitlin Howard and renowned director Chris Honer plus open auditions, Virtual Reality Theatre experiences and networking opportunities. Full details of this year’s festival will be revealed in due course.

Khushi, a brand new festival showcasing work made and inspired by Oldham’s South Asian communities, takes over the Coliseum from Wednesday 12 – Saturday 15 August. Through a series of dynamic projects that will bring artists and communities together, Khushi will present a rich mix of events for everyone including live performance, art installations, poetry, music and workshops.

The Coliseum welcomes six Independent Theatre companies throughout the season:

Plant Fetish by performance artist Chanje Kunda is presented at Oldham Library on Tuesday 10 March. It looks at anxiety and women in Mexico who, fed up of men, are getting married to trees.

The Last Quiz Night on Earth by Box Of Tricks is presented at Oldham’s Bank Top Tavern pub. The explosive new pre-apocalyptic comedy runs on Monday 16 and Tuesday 17 March.

Best Girl is a semi-autobiographical play written by actor Christine Mackie (The Coliseum’s production of Whisky Galore and Coronation Street’s Dr Gaddas) inspired by the loss of her father and performed by her daughter Lois. The production was supported at Edinburgh Fringe Festival by the Coliseum as part of Venues North in Summer 2019. It comes to the Coliseum Studio from Thursday 16 – Saturday 18 April.

Drowning, in the Coliseum Studio on Wednesday 6 and Thursday 7 May is the debut play by Dare To Know Theatre, a show about a 16 year old’s struggle with mental health.

Ladybones by Coliseum Supported Artist Sorcha McCaffrey  is  an uplifting and compelling story about OCD, dungarees and being weird but not a weirdo. Following a successful run at Edinburgh Fringe it comes to the Coliseum Studio on Thursday 14 May.

Shine in the Coliseum Studio on Wednesday 27 May is an immersive psychological thriller that blurs the senses and tricks the mind as the audience search for a missing girl.