Oldham Coliseum Theatre is thrilled to announce that it is co-producing the award-winning Paines Plough Roundabout next year, bringing three world premieres and a trailblazer short play to Oldham town centre in June 2020.

Created by Paines Plough, the UK’s national theatre of new plays, Roundabout is a portable in-the-round auditorium which pops-up across the country. 2020 is Roundabout’s seventh consecutive year; the season will be co-produced by Paines Plough and Oldham Coliseum Theatre in association with York Theatre Royal.

The Roundabout programme will include world premieres: Hungry by Chris Bush (Steel, The Changing Room), Black Love by Chinonyerem Odimba (The Sweetness of a Sting) and family show Really Big and Really Loud by  Phoebe Éclair-Powell (Fury, Epic Love and Pop Songs) performed in rep, directed by Paines Plough Joint Artistic Director Katie Posner, plus a new ‘trailblazer’ 30-minute short play, The Inconvenience Store by Charlotte Keatley. Roundabout will also host a programme of visiting companies, comedy, music and local community events. Full listings will be announced in due course.

Chris Lawson, Acting Artistic Director of Oldham Coliseum Theatre commented: “We are delighted to be co-producing Roundabout 2020 season with Paines Plough, and elevating our long-standing commitment to new writing in such an exciting way. We can’t wait for the Roundabout to take centre stage in Oldham town centre and would like to thank our colleagues at Oldham Council for their support of this programme.”

Councillor Sean Fielding, Leader of Oldham Council, said; “This is an exciting opportunity for Oldham and a great collaboration between the council and the Coliseum – bringing even more great theatre to our town.

“The Roundabout will be pitched next to the Queen Elizabeth Hall and we hope residents will get involved and come along and see it.”

Roundabout 2020 will arrive in Oldham town centre in June before transferring to Summerhall, Edinburgh for the Edinburgh Fringe Festival and York Theatre Royal in September, and then touring to Salford, Ramsgate, Doncaster, Bournemouth and Lincoln.  The award-winning venue flat packs into a lorry and can be assembled in a day with six people and an Allen Key. 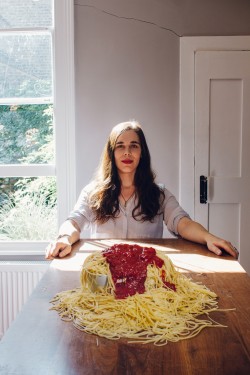 Hungry by Chris Bush is a new play about food, class and grief in a world where there is little left to savour.

“Show me your fridge and I’ll show you what you’re worth.”

We are what we eat, and Bex eats sh*t. It’s not like she has any choice though – when times are tough the last thing you think about is your five-a-day. Today is different though. Today the table groans, and the best china is out. Today things will change.

Chris Bush is an award-winning playwright, lyricist and theatre-maker. Her past work includes Pericles (National Theatre), The Assassination of Katie Hopkins (Theatr Clwyd), Standing at the Sky’s Edge and Steel (both Sheffield Theatres) and The Changing Room (NT Connections). 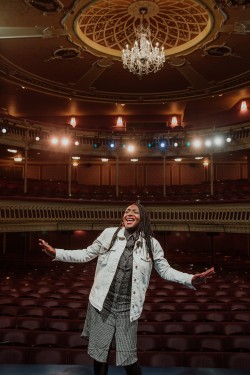 Black Love by Chinonyerem Odimba is brand new musical about love. Chinonyerem’s latest work explores romantic relationships between black people, and in particular of how this is portrayed, or more often than not, isn’t portrayed in theatre and on stage.

Chinonyerem Odimba is a Nigeria-born, Bristol based playwright, director and poet. Her work for theatre includes Joanne and Amongst the Reeds for Clean Break, London /The Yard, a modern retelling of Twist for Theatre Centre, Medea at Bristol Old Vic, and We Too, Are Giants for Kiln Theatre. More recently, a new play Princess & The Hustler toured across the UK for Eclipse Theatre/Bristol Old Vic/Hull Truck. She was the Writer-in-Residence at Live Theatre/Northumbria University and is now an Associate Artist at Live Theatre, Newcastle. Her work has been shortlisted for several awards including the Adrienne Benham Award, Alfred Fagon Award, and the Bruntwood Playwriting Award. She is the joint winner for the 2018 Sonia Friedman Award for a new play How to Walk on the Moon written for C4/Talawa Theatre. Currently Chinonyerem also writes for radio and TV, with a new 30-minute drama for Channel 4 scheduled to be broadcast in 2020. 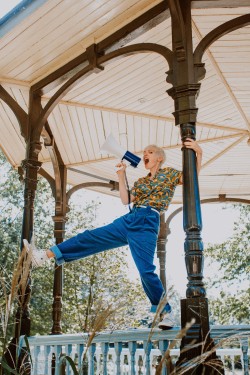 Really Big and Really Loud by Phoebe Éclair-Powell is a new play for families about living loudly.

Ten year old Charli is always being told to sit down and be quiet, so much so that one morning she wakes up and – nothing – her voice is gone. Her Mum is worried, her older brother thinks it’s hilarious, everyone keeps offering her a lozenge. But Charli knows this is big – she needs to find it before it’s too late.

Phoebe is a writer from South East London. In 2015 her debut play WINK received rave reviews and four Off West End Nominations including ‘Most Promising New Playwright’. Her play Fury, was runner up for the Verity Bargate Award 2015, and subsequently won the Soho Young Writer’s Award and received an Offie nomination for ‘Best New Play’. For 2016-17 Phoebe was the resident playwright at Soho Theatre through the Channel 4 Playwright scheme. During which she had two Edinburgh shows, TORCH with Jess Edwards (Underbelly, New Diorama), and Epic Love and Pop Songs (Pleasance Theatre). In 2017 Phoebe adapted The Picture of Dorian Gray for the Watermill Theatre, which toured schools and village halls. In 2018 Phoebe’s play These Bridges was part of the National Theatre Connections Festival. Prior to this Phoebe completed the Channel 4 Screenwriting course. She was also on the Soho Writers’ Lab for 2014/15. Phoebe was a previous member of the RCYW and the Royal Court invited group under Alice Birch. Phoebe has completed the BBC writersroom drama programme with Sid Gentle Films, and took part in Nick Frost and Simon Pegg’s YA incubator at their company Stolen Picture. Phoebe has written for award winning Channel 4 Continuing Drama Hollyoaks. Phoebe is also under commission from Fremantle Australia, and Live Theatre, Newcastle and is adapting a graphic novel with Twelve Town. 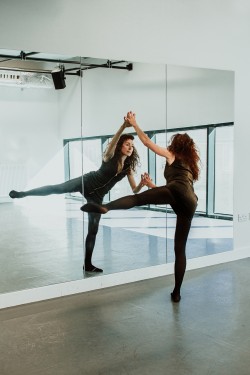 The Inconvenience Store is a new 30-minute short play by Charlotte Keatley, writer of My Mother Said I Never Should – the most widely produced play ever written by a woman.

How many versions of yourself are you wearing today? Just those three? Do they really fit you? Bee doesn’t fit hers. So she’s opened a shop, where the changing room actually does change you. The Inconvenience Store offers what is needed by those who aren’t Mr Normal- whoever he is.

Charlotte Keatley’s My Mother Said I Never Should has been translated into 31 languages, named as one of the National Theatre Significant Plays of the 20th Century, and a GCSE text. Her other plays include: Our Father and All the Daughters of War for the RSC. Charlotte has written for film, television, radio and won an EMMY for filming in children’s prisons for a C4 documentary. Charlotte also teaches creative writing anywhere in the world on request.